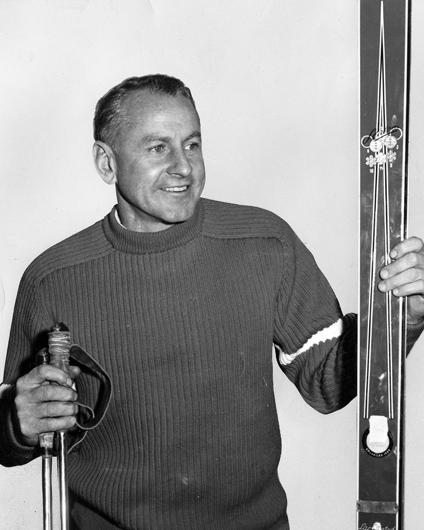 (Photo/Courtesy of Middlebury College)
Our origin

Our shop was started in 1969 by Robert Sheehan, aka “Bobo” to his friends, family, and his wife Leslie.

Bobo was usually prefaced with “legendary” when it came to the ski industry. He spent years building the Middlebury College Ski Program - coaching his teams to 11 Eastern Championships and two NCAA titles - he was the president of the Eastern Collegiate Ski Association - and in 1956, Bobo was the U.S. Men’s Alpine Team Coach for the ‘56 Winter Olympics in Cortina, Italy.

After that, Bobo and Leslie packed up their 4 kids (Steve, Patty, Jack and Butch) and moved to Truckee, CA where he managed the Alpine Meadows Ski Resort. Later, in 1969 and still passionate about the ski industry, Bobo and Leslie founded “Reno Ski Shop” in Reno, Nevada, which would later become known as BOBOS Ski and Board. BOBOS was passed down to son and daughter-law, Steve Sheehan and Mary Weneta in 1984, and they have been running the shop ever since! Today, BOBOS is a Family Focused Full Service Specialty Ski & Snowboard Shop that is proud to have a staff of Masterfit Certified Boot Fitters, Snowsport Rentals and a Full Service Wintersteiger Repair Shop.

It is from our founding family, that we get our challenging spirit, passion for performance, and the most distinctive aspect of Bobo’s coaching style - his patience and encouragement - that always made each of us feel like we could do it. As Bobo would say, get out and BOOT IT!™